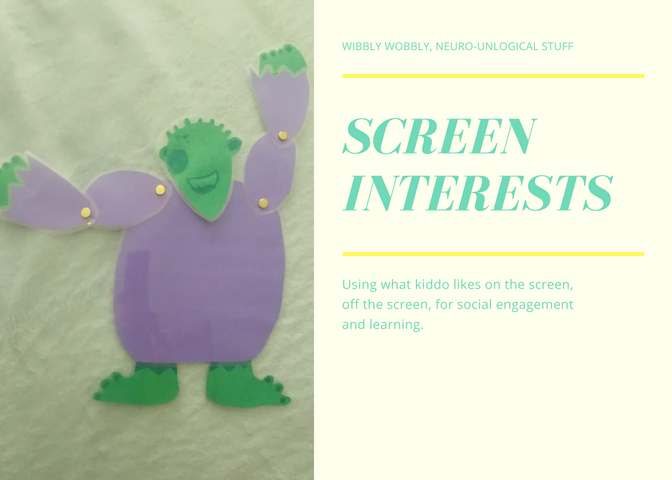 I have shared before how I use screenshots of Lady Bug’s preferred show at the time to encourage engagement and learning away from the screen. I have two Super Why examples that I’d like to share.

There is a Super Why episode, season 3 episode 2, that is wonderful for early literacy. The episode is called “The Alphabet’s Sad Day” and it teaches that letters go together to make words. I took over 50 screenshots of the episode, with ideas for multiple ways to make things with it. I had the idea to turn it into a complete preschool reading curricula. I did not finish that project.

But I did make one thing that Lady Bug liked very much. In many episodes, Alpha Pig (Lady Bug’s favorite character while going through her pig special interest phase) “builds” the alphabet, and the letters appear one at a time. I took a screenshot of that and edited out the letter, printed it out, and laminated it.

Then I printed out a screenshot of the whole alphabet. I cut the rows of letters into strips, and then taped the ends together to make one continuous strip. In the Alpha Pig screenshot I made two vertical slits. The slits are wide enough to show the w, but narrow enough to only see one letter at a time. Then I threaded the letter strip through the slits so that one letter is seen on the Alpha Pig picture at a time. I taped the ends together and voilà! a continuous alphabet for her to sing with again and again. You can do the same thing without the editing work. I don’t have file sharing set up, but feel free to save these pictures and use them. 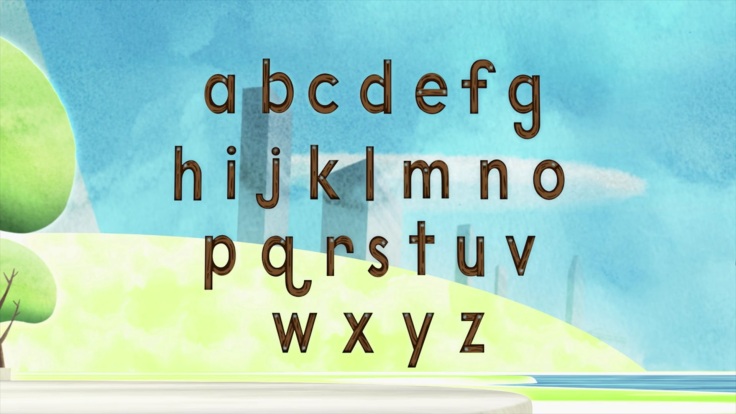 Then more recently, Lady Bug started asking for the very first episode, a Jack and the Beanstalk parody, over and over and over again. Day 2 of this, I used a screenshot print out as a templet, colored paper, laminating, and brads to make a poseable giant figure from the episode. (Pictured in cover picture.) I made her show tangible, and she liked it right away. Especially with me scripting “It’s the GIANT; AHHHHH! Fee Fi Fo Fum!” over and over and over again on request.

A week later she was still re-watching that episode, so I built a beanstalk on the side of our grandfather clock out of crumpled construction paper and tape. In the Super Why episode they build the alphabet up the beanstalk to climb, so I put the alphabet on leaves going up the stalk. And for fun I added a paper castle and cloud at the top.

We probably embrace screen time and screen learning a lot more than a lot of families. This is what works for Lady Bug, so this is what I’m going to use. If you think this would help engage your kid, too, try it out! Yes, it’s a time commitment grabbing the screenshots and making them. But it’s not a lot of money, and it can be fun crafting for your kid. Sometimes I think making things for people is my love language. Not always playing with those things I make them, but I do feel like I’ve expressed love when I give Lady Bug the latest thing I’ve laminated and she lights up.